What's in a Name?

Hi again, and a big thank you to everyone who turned out for the Church Vision Night on Sunday night - there was a real buzz about the place which was fantastic, although still no lattes :-(

One of the things I spoke about Sunday night was us changing the name of the church. Why would we want to do such a thing you might ask? Well for me there are three reasons why changing the name seems like the right thing to do.

Firstly in order to recognise that we are no longer just a Bracknell church. At the vision night I asked all the people who don't live in Bracknell to stand. At a rough estimate between a quarter and a third of the people there stood. For years Ben resisted us being confined to an area of Bracknell and being thought of as say Bullbrook Baptist Church or Priestwood Baptist Church. That was why the town centre location for the buildings was so important, it stopped us being confined to a particular area but allowed us to be a town wide church. Well the reality now is that part of the fruit of that is we've become more than a town wide church and now gather people from as far afield as Camberley, Maidenhead, Reading and Windsor. So on that level losing the Bracknell part of our name just seems like a recognition of that.
Secondly if you talk to people outside the church they almost never refer to us as Bracknell Family Church. We always seem to be referred to as "Kerith" or "The Kerith". It's a bit like Acts 11:26 where it says "The disciples were called Christians first at Antioch". That was a name the community chose for them rather than them choosing it for themselves, and Kerith seems to be the name the community has chosen for us so why not use it. We've also recognised that ourselves in the way we've used the name Kerith in http://www.kerith.co.uk/, Kerith Kids and Kerith in the Community amongst other examples.
Finally we're in the process of becoming a charity which will probably happen early next year, so now would be the logical time to change the name if we wanted to as doing it later would mean us having to give lots of money to the lawyers!
So what to change the name to? Our first thought was "Kerith Family Church" which has a ring to it until you take a look at the initials: 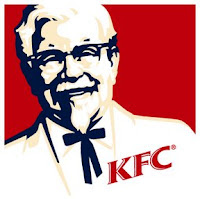 Finger Lickin Church!
Next we came up with "Kerith Community Church" which seems to be where we've stuck. I think it conveys the idea that we are a community, and that we seek to serve a community which is good. Somehow "Kerith Church" seems to short so we didn't go for that. In reality I think people will still call us "Kerith" or "The Kerith" but at least that really will be in the name of the church rather than just the name of one of our buildings!
So early next year we'll have a competition to design a logo. Personally I think the word "Kerith" needs to be big in the logo and the words "Community Church" small so that Kerith is what people remember, but let's see where we go with that. If you have any ideas for designs before we launch the competion just email them in - you'll still win the prize if your design is chosen!
So there you have it. On of our core values is to be Kaleidoscopic - always willing to change to create things of beauty which glorify God and are relevant in society. Well I think this is just part for outworking of that core value.
As always all comments are very welcome.
I head off with the team to Zambia tomorrow, so the next blog entry may well be from Zambia via the BlackBerry! Have a great day and be praying for the people you want to invite to the Christmas events.
Simon.
Posted by Simon Benham at 8:34 AM

Yes and Wokingham! I suppose I always just think of Wokingham as a suburb of Bracknell :-)

That was a joke btw before someone shoots me down in flames - not that any of you lovely people would do that.

Unfortunately we couldn't make the Church Vision Night - I always feel like we have missed out when that happens! I think the name change is a great idea - Bracknell Family Church seems far too conservative for us - time for a change!

Am enjoying your 'blog' by the way and look forward to hearing all about Zambia - what a fantastic opportunity!

How about if the word 'Church' is bold because that is the most important of the 3words that we are as well as being what people need to know/remember in coming to terms with slavation...

Posturing 'Kerith' which perhaps comes across to people as some secular charity body is aplogetic of our church-entity!