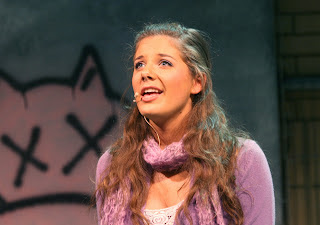 Many of you will know Heather Bryan (Mary from "Word on the Street") who since September has been part of our Year Team alongside Hudson Holt and Gary Millard.

Before Heather started her year she said that at some point she'd really like to go and visit a church overseas, and wondered if there was any chance of going to visit Mosaic, a hugely creative church in LA. We first came across Mosaic when Ben Davies heard their leader, Erwin McManus, speak at the Willow Creek leadership summit on "The Barbarian Way". Subsequently Erwin and his wife Kim have spoken here and a number of us have visited Mosaic.
Well to cut a long story short Heather contacted Mosaic and they said they would love to have her over. She's going tomorrow (Wednesday) with Eileen Mitchell for 13 days, and in that time 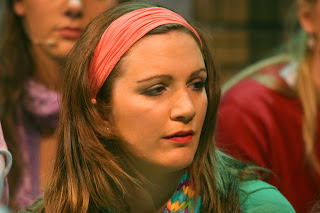 they're going to get involved in just about every aspect of the church including their musicians, dance, services, a stage show that's going on over there and a whole load of other stuff. And to top it all they're going to be staying with Kim and Erwin. How cool is that!
Lee and I wondered about pulling rank and insisting that we needed to go in their place but by then the flights were booked in their names!
But seriously, let's be praying for them that God will use this experience to change them and turn them into barbarians for Him. And lets each of us be asking God that we would be bold enough to follow a dream or an idea as Heather did and put ourselves in the way of God as they're often the things that take us to the next level.
Finally to say that we would love to have another year team from September 2008. There would be opportunities for people to be trained in any one of a number of areas - children's work, youth work, music, multimedia, administration, social action, working with special needs - the list goes on. There isn't any upper age limit so don't discount yourself on that basis. We're going to tie in with Newfrontiers for the theological bit of the year team training this time around which should also be good. If you'd be interested in taking this any further then please contact me via email or catch me on a Sunday.
Simon.
Posted by Simon Benham at 1:41 PM