Who Remembers "Bits and Pieces"

I don't know how many of you remember a Radio 1 competition that they used to have on their Summer Roadshow called "Bits and Pieces" where they would play bits of songs and then you had to identify them. I remember thinking how sad it was that my parents didn't know any of the songs in the charts and that I'd never get that "out of touch" - ho hum!

Well this blog entry feels a bit like that competition - lots of different and mostly unrelated bits and pieces of stuff which I've been thinking of putting in a blog entry and which you'll hopefully find interesting. 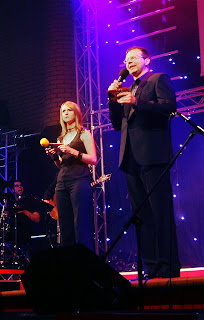 First to mention that Zoe Hayes (on the left in the photo and not to be confused with our George Clooney lookalike Andy Jackson) was at Spring Harvest recently in her capacity as Tearfund Youth and Student Co-ordinator. She had this to say about what she was up to.... "I was on the team running the youth and student venue called Iscape. We were up in Skegness. There were about 30 of us on the team and I went as Pastoral Leader for the venue, so headed up the prayer ministry and dealt with any issues that arose. I also did the main stage talk on night 2, on the subject of hope in the hard times, and also a seminar on sexuality (with a couple of other guys on the team). We had about 800 in our venue throughout the week and it was fab to see God working in their lives, particularly with some tough issues they're facing."
Cool eh!

Second sticking with the Radio 1 theme and to counteract the idea that I'm now a totally uncool old person who can't name a single record in the charts I thought I'd mention that as I'm writing this I'm listening to music from The Hoosiers. They're a great band with a very upbeat style (no depressing REM style music here) which is a mix of ELO, Jeff Buckley, The Cure and others. Check out their website here. What's even better about them is that Irwin Sparkes - the lead singer - used to be in our church and was part of the youth when Catrina and I helped lead it. He came to visit at Christmas to see his sister Esther Buck in our Christmas Eve drama (Esther and her husband Guy are part of the Kerith Community). It was great to be able to able to introduce my son Zak (who loves The Hoosiers) to "my friend" Irwin! One of my dreams is that we would be a church that raises up and encourages leaders of all ages in all areas of society including politics, the media and the creative arts so let's be praying for more Irwin's. Let's also pray for Irwin - that he'll be be gripped by his "first love" for Christ and use the influence he has to impact others.

Finally we've got a really exciting weekend coming up with the NewFrontiers Social Action Conference on Saturday (you can still turn up on the morning and pay on the door), the start of our series "All you Need is Love - Love in a Broken World" on Sunday morning with Catrina and I discussing a 'live' issue in our marriage which we haven't previously discussed and I know nothing about (how scary is that!) and Rachel Hickson on Sunday evening - please park in Avis if you can as we're expecting a big crowd. On Sunday afternoon we're also hosting the Scouts St. George's Day Parade with Ethos, our Youth Band, playing and I'm off to Chris Porter's induction as Senior Minister at Easthampstead Church.


Well that's it I think. Hope to catch you some time over the weekend,

i think the whole blog idea is fantastic.....when we did the
"40 days" it kept us in touch with lots of others....

i personally....love to hear what others are getting up to and this is a great way to do this.....

hearing what Zoe is up to and Karen Mehta and what the youth respite are doing enriches our experience of community and allows us to be a wee part of it.....

totally agree Irene, for me it helps us feel more like family and a loving community.....looking forward to tomorrow!!!

Yesterday morning was very good. I obviously still have some learning to do though! I came home and said it was really good this morning, went into all the details of he said, she said, as we females do, then noticed the glazed eyes, the tv on, not only on but with cricket on!!

Love the Bits and Pieces quiz...I was very good at it in those blissful days of long school holidays and I'm pleased to report that my musical memory is holding up well :¬)

Glad to hear you're all enjoying the blog and find it helpful. And that you're musical memory is holding up Jo!

just to encourage you all. Those born after the 1970s enjoy the blog as well.