And the Winner of the Logo Competition is ..... 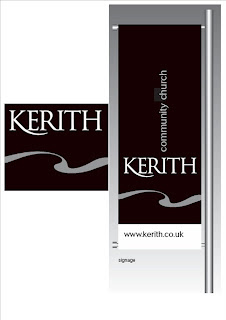 .... logo number 1.
There will now be lots of work going on to turn this into Letterheads, T-Shirts, Flags, Minsitry specific logos and a whole host of other formats ready for Name Change Sunday on the morning of the 20th July. A big thank you to everyone who entered the competition, who voted and to the in house creative team who are making this all happen.
I've had great feedback from the Church Vision Night last Sunday - not only on the new logo but on the whole Peach and Coconut idea (there will be another blog entry to explain that to those of you not there), the Parenting Course and in particular the update on the HIV/AIDS initiative. As a summary Tearfund have now got back to us with a draft report on the project we are proposing to fund in Serenje in Zambia - it's looking quite a bit more expensive than initially proposed (£400,000 over the first three years rather than the £150,000 we initially proposed) but by the end of the project will be funding 3,000 orphans and vulnerable children to go to school, as well as bringing a number of other benefits to the community. I'll share more details once we get the final version of the report but so far I've been thrilled by peoples "we can do this" attitude. We've already received a gift of £500 from one couple towards the project which is a fantastic encouragement.
Hope you're having a great week letting your light shine.
Simon.
Posted by Simon Benham at 5:23 PM

Hi Simon
it occurred to me how apt our new logo is when I reflected on the previous Sunday - the 'kerith' is surely the light shining out of the dark and the 'brook' is indeed representative of the living water from Sola's sermon. Funny how things work out. and so timely. At least, that's my take on it.
An excellent turn out and a very positive reaction I thought, to your vision for the church.
Being the new boy, I was astonished just how much the church does in local and global support. Fantastic stuff Simon.

Like the logo Simon - good choice! It was great to see you and the family the other weekend, although when you were taking the photo I didn't realise it would end up on the internet - I'd have smartened up a bit if I'd known!! Drop in any time, likewise any other Kerithites who may be passing through the Peaks - do come and say Hi.