International Leaders Gathering at the Summit 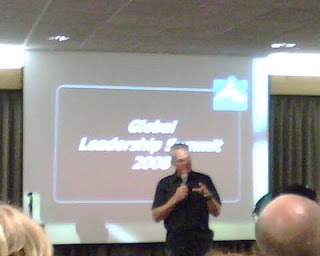 Greetings from Chicago. The photo is from a meeting tonight where all the international leaders at the Summit are invited to a reception where Bill Hybels speaks. I chatted to quite a few people I knew from previous events as well as two South African guys, one who leads the Dutch Reformed Church in South Africa representing 300 churches and 300,000 people (or something like that) and the other who has a church of 12,000 people in Soweto - I sometimes wonder what I'm doing at these events! It was very good to be there though, I love Bill's honesty and openness, he's doing the first session tomorrow - can't wait.
During the day today Catrina and Mo went to a conference for women leaders hosted by Nancy Beech and Nancy Ortberg - they both said it was very good. Catrina also talked to a lady called Holly Wagner who is from LA and has written a book called God Chicks which some of you may have read. Whilst the girls were there Ben and I went to downtown Chicago and went up the Hancock Tower which is 100 storeys high and is the 4th highest skyscraper in the US. The views from the top were amazing.
After this evenings meeting we all went to the airport to pick up Craig Mills from the airport - the Bracknell contingent here is now complete!
More tomorrow.
Simon.
Posted by Simon Benham at 3:54 AM

Simon it is very refreshing to hear you feel humbled in the presence of people who seem to have some credibility based on the size of their measured influence by counting the people in their churches.

Derek Brown talked about this. God clearly favours some people to gather a crowd and to build vast organisations, but with that comes great temptation.

Pray for the sort of influence that Jesus talked about-yeast that multiplies and transforms flour and water into something full of air and moisture which tastes and smells good and is eaten fresh every day.

Even the way you use this medium is a means of being yeast-you have no idea who reads it and how it changes people. Those who respond are merely the tip of the iceberg compared with those who read and think and ponder and change.