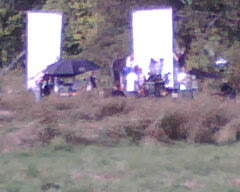 It's been such a privilege to have 2 days away with some of the staff. We did quite a bit of planning for our 3 meetings in January, looked at the talk Craig Groeschel did on IT at the Summit and just enjoyed being together.
We also watched the film crew I mentioned yesterday at work which was fascinating. Their attention to detail is quite incredible and a real challenge to me as we look to do more media stuff. There must have been 100 people there when I went for a run at 7.30 this morning and they were telling us this is a low budget movie! The film is going to be released next June, is about Charles Darwin, stars Paul Bethany and will be released next June. They wouldn't let us be extras though!
Tonight I've been karting in Milton Keynes with some guys from the company I work for. Great fun but my arms really hurt now!
Simon.
Posted by Simon Benham at 10:16 PM