I turned up at The Kerith Centre at 7.30 am on Friday and Saturday and 8.30 on Sunday, each time to be greeted by hordes of people who were already there to make the conference and our Sunday gatherings happen. And the vast majority of those people were volunteers. They hadn't got out of bed that early because someone had paid them to do it, but simply because God has given them a heart to serve. I can't tell you what it means to me to be part of a community like that. To see young and old, black and white, rich and poor serving alongside one another is what church is all about. If you were one of those people then thank you so much. Please know that what you do is so appreciated.
There was another team that turned up at 8pm Sunday night to take down the stage set, pretty much the same team which had been in the building until midnight on Wednesday and Thursday night putting it up. It looked magnificent and so added to the conference experience. The good news is that at Christmas we're looking to buy in a permanent set which will be similar to the one we had for Willow, but with more space for dance, drama and more singers, as well as being much better for filming and with an improved PA. That will make putting on events like the GLS so much simpler, as well as enhancing our Sunday experience. Until then here are a couple of pictures of the stage as was - sorry for having to have me in the photo but that was the only photo John Mitchell took of the whole stage, so blame him :-)
Keep connecting with God in prayer throughout the day as Ben reminded us on Sunday night.
Hope you have a great week,
Simon. 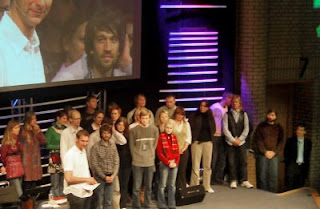 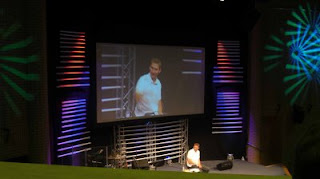