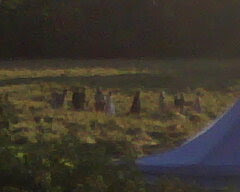 I've come away with some of the staff team for two days at Waverley Abbey, creating a bit of headroom for us all to take stock of Willow and think about what we do with it all.
The photo probably isn't very clear but there is a film crew here making a film about the life of Charles Darwin. They're filming a scene where Charles Darwin and a load of children run towards a lake. Not exactly Indiana Jones but watching it has kept all of us amused - it doesn't take much!
Talking of Charles Darwin we'll be looking at evolution versus creation next year. Perhaps we'll show some of this film!
Simon.
Posted by Simon Benham at 5:20 PM