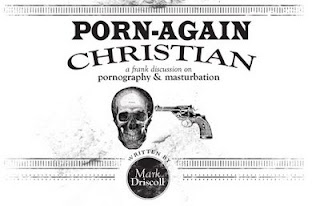 Every now and again I begin to write a blog entry and find myself asking the question "I wonder if this is going to get me into a lot of trouble"! I remember that feeling when commenting on the Lakeside Revival and some of what was going on there. Well I feel it again now. But I also feel that this issue is so important that I want to take the risk of getting into trouble rather than missing an opportunity.

If you were in church today you'll have heard me talk about the Elephant in the Church of Sex, and as part of that I talked about pornography. I felt there was a lot more I wanted to say on that subject, but given the limited time available suggested instead a booklet by Mark Driscoll which I'd like all the men in the church over 16 to read (and for all parents with boys under 16 to consider whether some of this would be good to share with them too). It's definitely written for men, so girls I'll leave it up to you what you do with it.

It might prove a bit controversial, so in order to try and limit the number of emails I get this week I'll make the following comments:

You can find the booklet by following this link.

I'm sitting here wondering whether to write anything in response to this blog entry or not. Knowing that Simon specifically recommended the leaflet to guys, what will folk think of the fact that I read it. Though as a woman who walks with her eyes open, I have see evidence of much of what I read in this leaflet - on the middle shelf of newsagents/petrol stations/supermarkets; in adverts for some violent & sexual computer games; films; the news; newspapers; the video store; even the seemingly 'innocent & fun' series 'Friends'. Please don't let any guys try to kid themselves that because some women won't read this leaflet, we haven't already personally seen in our regular daily lives what is referred to in this leaflet. Self esteem for women is hugely based on what we look like. Are we this enough, that enough, and our girl/women magazines only support this mode of thinking. We need Christian men to be men by not only getting their hearts right with Jesus and taking on the battle of sexual purity. We need them to help us be honoured as sisters, daughters, mothers, wives and friends. To do that we need to know that they're not asking us to be anyone other than who God made us. To do that, they need to stop dehumanizing women by allowing themselves to consider women just another gadget to gratify their desires - either by the way they look at us or how they treat us. You men can, by loving God and loving the women in your lives as Jesus loves, transform a generation of sons and daughters, brothers and sister, boyfriends and girlfriends, future husbands and wives. Please do read this leaflet - especially the bit about Ted Bundy. Please invite Jesus to heal your heart if you struggle. Let God's church rise up and be the light it was and is meant to be.

I ,too,wondered if I should comment and I am encouraged to know I am not the only woman who read mark Driscols booklet. Alli has said it all and I can only echo and agree.

I feel Simon raised a much needed subject on Sunday and in the conversations I have had with 5 women in last 24 hours we all need to be asking God to continue to shape and mould us into a community that isnt afraid to be "real".

For too long many of us have hidden behind our masks and allowed isolation to breed a false sense of church life.The world around us is crying out for Authenticity and this whole subject of sex needs to be exposed to the light of Jesus Christ.

Thank you to both Simon and Catrina for being so brave and so honest .
Irene M

Absolutely excellent Simon the way you presented this on Sunday morning. I have as you suggested read through online the leaflet and must say did not find it half as scary as you made out. Completely agree with the comments that Alli has made, I do believe as the literature says that it is so easy for us guys to look at the opposite sex as something other than a sister, daughter, wife or friend particularly in this day and age when we are bombarded with so much visual imagery relating to sex and that plays on one of the primary triggers of the male sex drive.

I was challenged again by the verse from Job that 'I made a covenant with my eyes not to look lustfully at a woman' This was probably one of the first verses I ever remember memorising many years ago when I was in a discipling relationship with Steve Finn and one of the subjects we discussed at that time was as men how do we deal with the day to day sexual temptation that is put in our way.

I think you can still read the article on the DesiringGod website...

Thanks Irene and Chris for your encouragement. I did have a minor 'panic' - should I really have written that kind of moment. So to see your support has helped me feel ok about being me. Thanks again.

Also - have to agree with Irene and Chris that I want to commend Simon and Catrina for tackling this subject. It is brave. It also very much appreciated!

Following the sermon's on sunday, (which I must add were refreshingly honest and, lets face it needed) I too read the leaflet and can only agree with Alli's points. Although it may be aimed at men, this IS an issue that the church as a whole needs to be open and clear about so, as part of our peach community, men can be united and supported if they feel alone in the issue.
My view is, (and feel free to disagree) we as a church cannot risk burying worldly issues such as this- and letting them potentially be soul destructive to members and outsiders. Although not all of the leaflet I totally agreed with, (eg. the slight implicating that God will 'whack you with sexual diseases' following sexual immorality) I can only re-iterate for men to read and share within small groups, and Dad's to work through some points with sons - for the next generation cannot afford to stay silent.

Thank you again for the series... it has been much help so far :)

Thanks for all the comments. I've been really encouraged by the feedback to the series, and to this talk in particular. Fortunately I haven't faced the sack yet for anything I said :-)
Simon.

I really hate myself.

I'd Just like to add a comment to the 32yr old guy, May I just say that took a lot of courage to admit what you have there are not many guys brave enough to admit that. You should take pride in the fact that you are an honest and brave guy... I am sure you'll meet the right lady who would be flatterd by your eagerness and if they dont then they are not for you, I was once told if someone cant except you at your worst they dont deserve you at your best... Dont hate yourself, believe in yourself as Jesus believes in you and I am sure loneliness wont be a problem anymore. There is someone out there for you and I am sure you'll find her.