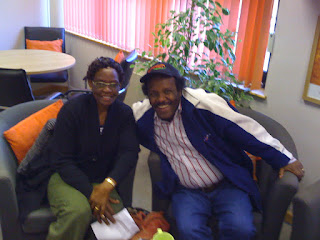 Those of you who were there on Sunday night will know that Edward and Frida Buria have been with us for a few days. I got to spend an hour with them on Tuesday morning and it was great to hear how God has been using Edward in putting Kenya back together again after the recent political unrest there.

It was also very encouraging to hear Edward's observations on developments here in Bracknell. He was particularly inspired by seeing the youngsters playing on Sunday night, and the way a new generation is being released to use their God given gifts.

We're so privileged to have people of the quality of Edward and Frida just passing through. Don't forget that Andrew White (the vicar of Baghdad) is speaking this Sunday evening - another event not to be missed!