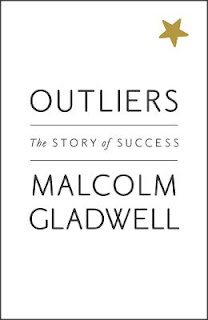 One of my "Christmas" books this year was Outliers by Malcolm Gladwell. He's a sociologist (with crazy hair) who seems to have a gift for explaining things in ways which even an engineer like me can understand, and often comes to some very surprising conclusions as to why things are the way they are.

His second, Blink, looked at how we often make our best decisions by going with our "gut reaction", rather than endless analysis of what is going on.

Outliers looks at the ingredients of success, and tries to challenge many of our preconceptions as to what it is that makes one person more successful than another. For instance how your date of birth can make a huge impact on whether or not you make it as a successful sportsman or woman. In particular I found the first chapter on why the American town of Roseto has so few health problems resonated with many of the ideas lots of us would have reagrding the power of community to make a huge differences on the lives of the individuals in that community. There's quite a chilling section on how the nationalities of airline pilots has in the past been a big factor in a number of major crashes and some interesting analysis on how hard work really does pay off.

Gladwell isn't a Christian, so obviously there is no God dimension to what he writes. However, that doesn't mean there isn't a load of stuff we can learn from his observations. For instance there's a great section in The Tipping Point where he talks about an experiment done on some Bible students to see whether they would live out the story of The Good Samaritan which they'd been studying. Basically it was whether or not they were in a hurry which decided whether they would help the person in trouble - that alone has something to say about the pace we all try to live our lives at.

So if you fancy reading something a bit different why not give Outliers (or one of his other books) a go.