After the Andrew MacKay Meeting 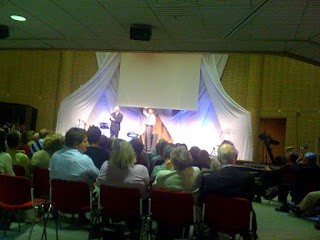 Well I think we achieved what we were asked to do on Friday night, which was to provide a venue where constituents could hear from Andrew MacKay about his expenses claims, ask their questions and make their feelings known. Quite a number of people clearly feel very upset and disappointed with what has happened, and eloquently made their points in a number of different ways. Others expressed their appreciation for what Andrew has done as a constituency MP, but were divided as to whether he should stay on or not. The meeting got quite heated at points, which felt really strange as it was such a contrast to the atmosphere we would have on a Sunday. I'm not going to get involved in the debate over Andrew's future, beyond what I've already said, but overall was happy that we'd said yes to hosting this event.
I also want to say a huge thank you to our teams who have overseen two conferences and two major public events over the last fortnight, as well as all our 'normal' events. I'm so proud to be part of such a fantastic team.
Simon.
Posted by Simon Benham at 11:05 PM

On Friday 22/5/09, 400 miles away from Bracknell, in Scotland, I was delighted to see the Kerith Centre as a focal point hosting a public meeting for Andrew McKay, MP for Bracknell, on the BBC National News. This was Ben Davies’s vision many years ago to have a high profile building to be used for the community of Bracknell, when the plans were still on the drawing board.

Over the years on good terms with Ben, Andrew McKay took a great interest on how the progress of the 1,000 seater building was developing and how gifts of money came in to get it paid for from us as “Friends of Bracknell Baptist Church”.

I heard it was Andrew McKay who requested the Kerith Centre to use as a venue for his public meeting.

Because of Andrew McKay’s misuse of his position and dishonesty that has come to light, like many other MPs recently, his political career sadly ended at the Kerith Centre that evening.

The Rev Ben Davies had a tablet built into the wall as the Kerith Centre was being built. It can be seen in the entrance foyer, with the words from the book of Exodus, “Righteousness exalts a nation”. How appropriate these words are in this latest situation. Evidently God is clearly at work in our British Parliament.

Misquoted the verse. It is in Proverbs 14:34

I was there on Friday night and it got quite heated, but perhaps not as lively as Prime Minister's Question Time. It was exciting seeing the Kerith Centre live on the BBC News and featured with the main news story. I think it was great for us as a church to offer the Kerith Centre for the evening and to be part of the news going on in our community.

For anyone who missed the event, I made a short film of Andrew MacKay MP outside the Kerith Centre, Bracknell.