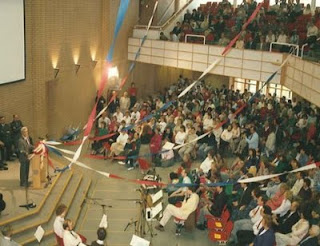 I thought long and hard what to say about today being 20 years since we opened The Kerith Centre. I wondered about writing about how the building still looks great after 20 years (hats off to Ralph), the way that it set the trend for other churches to embark on multi million pound building projects, the debt of gratitude we owe to those who took such a faith risk and gave so sacrificially, or the things which have gone on in the building (such as Willow conferences) which were never dreamed of when it was built.

But instead I want to say something to those of us who are enjoying the legacy of having the building. I'm reminded of David who longed to build the temple, but was told that responsibility was going to fall to his son Solomon. David didn't just go off in a strop, but instead began to gather together all the materials required to build the temple, and made sure Solomon was very clear on how it was to be built. He made sure that his vision would carry on into the next generation by leaving a fantastic legacy.

I feel that many of us represent a Solomon generation. We've inherited a fantastic legacy from those that have gone before. Not only of buildings but of faith, of reputation, of integrity, of vision, of gifting and many other things. The challenge to us is first to recognise and be thankful for what we have, and then to make sure we build on that legacy with the same vision, faith and courage as those that have gone before us. Just take one example. So many of my peers who are leading churches are struggling with lack of space on Sundays being a barrier to growth - just talk to my great friend Sean Green in Reading. Well the reality for us is that we could double the size of each of our Sunday meetings and still not have them full. That would take us to at least 1,800 people on a Sunday, within touching distance of our goal of 2,000. That doesn't mean that we don't face a load of other challenges, just as Solomon did, but our legacy means that space on Sundays isn't one we'll have to worry about for a while.

What I love is that the previous generation are still around to be part of what is happening. On Sunday night to sit with David and Elizabeth Sutton as they watched their granddaughter being baptised. Or to see Ben on Sunday night jumping up and down with excitement at the 250 who had come to see the baptisms declaring "this is what we built this building for".

So whether we're of the David generation that built and paid for the building, or the Solomon generation who are enjoying the legacy, let's continue to step out such that in twenty years time (when I'll be just about planning to retire!) we'll have a load more things to look back on and celebrate.

Simon.
Posted by Simon Benham at 6:00 AM