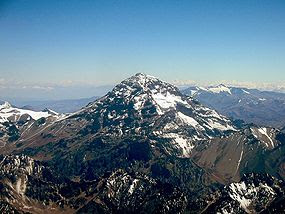 If you were there for the 9am meeting this week you'll have heard me talking with Tony Pudner about how God healed his back after prayer the previous week - he hurt it a number of years ago carrying a roll of carpet, but says it is better now that it has ever been - praise God!

People say to test healing, and Tony is certainly doing that as on Monday he set off, with his son David, to climb Aconcagua in Argentina. Aconcagua is nearly 7 km high, is the highest mountain in the Americas and the highest mountain outside of Asia. It should take them about 20 days to climb it (most of which is overcoming the effects of being at such altitude) and if all goes to plan they'll get to the summit on New Year's Eve or New Year's Day.

As a result of the climb Tony is hoping to raise money for a new youth building at Oakwood. If you'd like to donate then please visit Tony's JustGiving page.

Not surprisingly mobile phones don't work on the mountain, but if Tony does manage to send through any updates I'll post them here. Think of them both as you're seeing in the New Year!

Simon.
Posted by Simon Benham at 9:00 AM