When Bankers are the Good Guys! 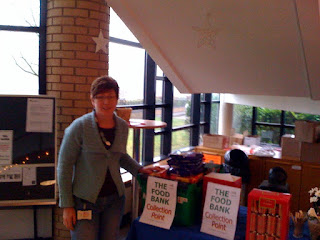 On Friday I had a visit from a lovely lady called Angela Bristow who works for HFC Bank in Winkfield. The staff at the bank recently held a Charity Christmas Bazaar and decided to donate the money they raised to our community based projects. Angela came in to give me a cheque, along with a whole load of Christmas goodies which they had bought for the Foodbank.

It's so exciting to see how we're increasingly engaging with the local community, both with the community blessing us and us being a blessing to the community.

Just to give you a Foodbank update the figures to the end of November were that we've collected in over 4 tonnes of food, given out nearly 1.5 tonnes and helped 54 different clients who were referred to us by 22 different agencies. I also heard today of a church in another area which is thinking of opening a Foodbank after hearing about ours.

Just one of the many ways God is blessing us.