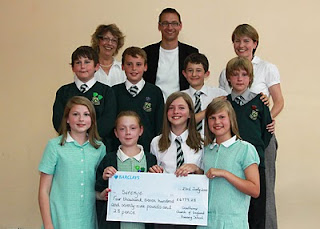 Last Friday I went back to primary school. Not my old school, which would have been an enormous trek to Mickley Primary School in Northumberland, but to Crowthorne Church of England Primary School.

I went there for their year six leavers assembly, to give out prizes to children who had done well throughout the year but also to receive a cheque from the school. The school have spent this year raising money for Serenje. The children have spent the year not only learning about life in Serenje, but coming up with a whole load of imaginative ways of raising money. They've done everything from sponsored events to setting up small businesses to talent shows to a night at the proms.

They made me sit down when they announced the total, which was a good idea as I was totally overwhelmed when they announced that £4,779.28 had been raised by the children. That is a truly astounding total for a small primary school, and will make an incredible difference in the lives of children in Serenje. It will be used to buy things like books, pencils, rubbers and classroom equipment, as well as seed and garden tools so that crops can be grown to provide the children with a meal before they start school.

I'd like to say a huge thank you to not only the pupils of the school, but also the teachers and parents who have worked incredibly hard to support the children in their fund raising efforts. In particular I'd like to recognise Mrs Gellatly, the Headteacher, who has been such a champion of the project, and our very own Ruth Jackson, the Deputy Head, who has been the link between the school and Kerith. Hopefully they and all the teachers and TAs will now get a well earned rest!