The funeral for Ed will be on Monday 6th September. There will be a committal service at Easthampstead Park Crematorium for family and close friends at 9.45am, followed by a service of thanksgiving for Ed's life at The Kerith Centre starting at 10.30am. As always if just coming to the thanksgiving please park in the town centre car parks so that we can leave the parking at the Kerith for the elderly, disabled and people coming from the crematorium.

I've spoken to so many people over the last few days who have been sharing their memories of Ed. From people who travelled with him to Uganda and Zambia to people who performed with him in various plays and dramas. Several people who said he was one of the first people to speak to them when they first came to Kerith, and that he had remembered them and would always look out for them and say hello. People who knew him closely and others who just knew him from a distance. All have spoken of his warmth, his love for Jesus, his willingness to help anybody and his authenticity.

I know many of us will have work and other commitments on Monday, if you have then don't in any way feel guilty about that, but if you can please come and join us in thanking God for a very special friend.

Simon.
Posted by Simon Benham at 9:50 PM No comments:

I got the very sad news last night (Thursday night) that Ed Garton had passed away. He died of an undiagnosed hereditary heart condition which caused him to have a heart attack.

I'm still feeling shocked by the news of Ed's death. He was one of the characters around Kerith, with an incredible servant heart. Whether it was performing in The Vigil at Easter, doing building administration, welcoming or car parking on a Sunday or just being a part of our community he always lived life with his heart on his sleeve and with an incredible passion for Christ. He had a powerful personal story of how God saved him from a life of alcohol, and was always grateful for what Christ had done for him. In many ways he was a rough diamond, but one who shone brightly for Jesus.

I went to see Ed's family this afternoon. They too are shocked and grieving at the loss of Ed, especially as Ed's mum Brenda only passed away a couple of weeks ago. However, they also reflected on what God had done in recent months in the relationship between Brenda and Ed. Few of us could forget Brenda being baptised at The Kerith Centre a couple of months ago, despite her advanced cancer, and the family spoke with pride about how Ed personally planned, spoke at and sang at her funeral service. Please be praying for Ed's dad, Daniel, and his sisters and the rest of the family as they come to terms with their loss. Also for the many people in our community who counted Ed as a friend.

The family said that in many ways Kerith had become Ed's family. They would very much like him to have a 'Kerith style' committal service and thanksgiving in Bracknell, which we will now start to plan. We will let everyone know the details as soon as we've got times and dates, hopefully early next week.

Let's remember that Ed has gone to a (much, much) better place - death has indeed lost it's sting. Hope to catch you on Sunday.

The Global Leadership Summit has finished, and we're sat having coffee doing a debrief. I did write a review of day one but it got swallowed up somewhere between sending it from my iPhone and it getting to the blog - very frustrating!

It's been a superb conference, and a real privilege to be here. As always there have been a huge variety of speakers - church leaders, business leaders and social commentators, each one bringing their unique take on how we can get better as leaders. Highlights for me were Christine Caine for her raw passion, Daniel Pink for helping to articulate much of what I instinctively do as a leader and a guy called Jeff Manion who you'll have never heard of but who preached an incredible message called 'the land between'. You can see some highlights of the conference here.

I can't wait for you all to have the opportunity to see the speakers we've just seen in October. Please be there if you possibly can, either as a volunteer, or by getting in at the special rate of £30 if you're part of the Kerith community - just register at reception.

Saulius and Sanna from Lithuania, and Edward and Fridah from Kenya have had a fantastic time too. Saulius will be hosting the first Lithuanian GLS in October which is very exciting.

We fly back tomorrow - can't wait to be back in England and see the children again (I hear they've had a fabulous time at Rocknations). We're then off for two weeks holiday, all ready to kick off again in September. 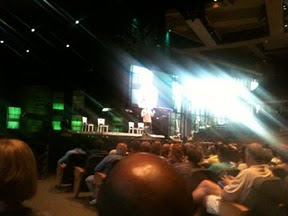 Believe it or not but this is Bill Hybels speaking to us at a meeting the night before the Summit for the numerous international guests. I've already met leaders from a number of churches in other nations who've been to Bracknell to see how we do the Summit, and a pastor we met last year in Zambia - it's a small world!

Yesterday was one of the saddest days I can remember. Yet God seemed to do the same thing he's been doing ever since we first heard of Angharad's death, whether it's been at a prayer meeting, on a Sunday or at more impromptu gatherings. Taking us from a place of sadness and confusion at the start to a place of hope and purpose by the end. That's what God has been doing ever since the Holy Spirit hovered over the deep in Genesis and brought order out of chaos.

There's so much more I could say about yesterday, especially about Bill & Anne's courage throughout the day. Let's keep praying for them. But I want to finish by thanking God for being with us so powerfully in this past season, and for loving us so much that He sent his son to die in our place so that we don't mourn as those who have no hope.

Posted by Simon Benham at 8:23 AM No comments: