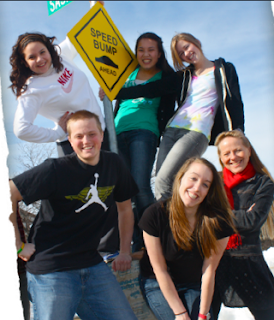 We've got a group visiting us from Canada this week. They're from Millar College of the Bible in Pambrun in Canada (no I had no idea where Pambrun was either - here's a Google maps link). Our link with them is through Michael Ross-Watson who has been out there to teach in their Bible school. They're over here to do drama in schools and churches all around Europe, including in Ireland, Germany, Spain, Latvia and hopefully Albania. Lee, Michael and I picked them up from Heathrow on Tuesday, and they fly out to Ireland next Tuesday.

Whilst they're with us they're going to be getting over their jet lag, working with our youth drama group, teaching at the Academy, taking in the royal wedding and putting on a play at the 7pm meeting on Sunday night called "Unlikely Heroes", which will include the youth drama team and takes a look at some of the unlikely heroes in the Bible. If you're not a Sunday evening regular then please think about coming along as it sounds like it's going to very funny, as well as being suitable for all ages (no school on the Monday so bring the children too!). They'll also be around on Sunday morning so hopefully you'll catch them some time over the weekend.