The Parable of the Kitchen Drawer Handles 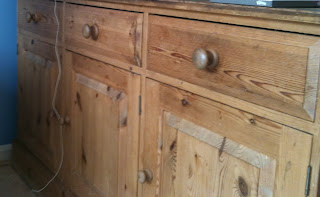 Perhaps one of my strangest blog titles, but it relates to something that happened over the Easter weekend.

We've got a dresser in our kitchen, and over the years the handles have come off three of the drawers. That just left a screw sticking out, and if you've ever tried to open a drawer by just pulling on a screw thread you'll know it's not easy. In fact if you get it wrong then it can be pretty painful. But we just got used to living with it the way it was.

Then this weekend something amazing happened. I went into the shed to look for something else and there saw a bottle of wood glue. Unused for several years (I don't do much DIY!), but still working well enough that within about five minutes I'd glued all three handles back on again . Oh what joy to now be able to open the drawers without risk of shredding your fingers, or the threat of someone impaling themselves on the end of the exposed screw! And having lived with it for years, how stupid that it only took five minutes to fix!

It got me thinking about what other things are going on in my life which I just put up with, but which a few minutes effort could actually fix, or start to put right. There are certainly a couple of other minor DIY projects around the house I now feel enthused to tackle. I'd stopped running but felt inspired to start again this week (and actually got out of the house!). I did a proper budget for this month for the first time in a while. And there are a couple of phone calls I'm going to make today which I've been putting off for a few weeks now. I can't tell you how satisfying it feels to be on top of a few of those things.

I wonder if you have similar things in your world you're putting off doing. Maybe it's DIY, finance or fitness related. Maybe you've just got out of the habit of reading your Bible or spending time with God daily. Perhaps there's a phone call you need to make, a letter you need to write or a friend you need to invite out for a coffee to restore a relationship. Not complicated things, but just those little things we put off, which when don't do them just add to the sense of chaos in our lives - rarely bad enough to stop us in our tracks but annoying frustrating things like the screws on the drawers. Why not write a few of those things on a list and get them done today. If you're feeling brave you might even want to share them on the blog / on Facebook.