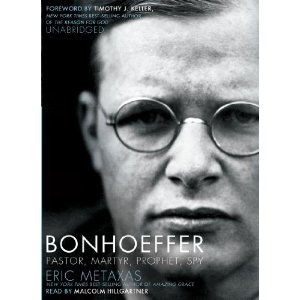 I mentioned on Sunday that I've recently read a biography of the German pastor, Dietrich Bonhoeffer, and that it has increased even further my appreciation for everyone who who fought to overcome Hitler and the Nazi regime, and added a deeper understanding for me this year in my observance of Remembrance Day and Remembrance Sunday .

I knew little of the life of Bonhoeffer before I read this book, but the more I read it the more I came to admire this incredible man of God. The author, Eric Metaxas, has managed to write a book which reads like a really good novel or a thriller, at each stage drawing you further in to the story and making you just want to keep on reading more to find out what happens next (don't start reading it late at night!).

I'm not going to tell you any of the story, as that could spoil it, but I will say that what you read of in this book is not some 'sinless saint', but a man who struggled with working out his faith, who wrestled with how to apply the Bible to his context, who was let down by the people around him, who knew both great joy and incredible sadness, yet through it all kept strong in his pursuit of God and all that God had for him to do, and showed incredible courage and bravery.

I've asked the wonderful team who run our bookshop to order some copies of Metaxa's book in, but if like me you're a Kindle devotee it is available on Kindle too. This book would also make a great Christmas present, perhaps even for people you know who have an interest in the Second World War, but wouldn't normally read a 'Christian' book. I think they'd find it very accessible and might open their eyes to an aspect of the war they've never considered before.

Finally I wanted to use this opportunity to apologise for the mistake I made at the 9am meeting this week. As I introduced the two minutes silence I spoke about our armed forces fighting in World War 2 against what the Germans wanted to achieve, rather than what the Nazis wanted to achieve. There were many Germans, like Bonhoeffer, totally opposed to what Hitler was attempting to do, and I would never want to blur the distinction between the people of Germany and the Nazis. I did apologise to two of the Germans in our community straight after the meeting, who very graciously forgave me. Please will those of you who were there extend the same grace to me.

If any of you do read the book I'd love to hear what you thought of it. Have a great week.