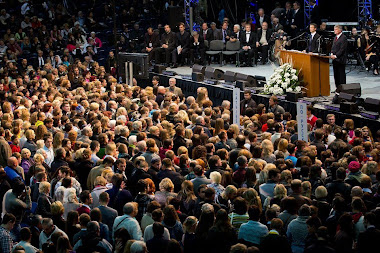 Franklin Graham, the son of Billy Graham, was recently in Lithuania, and Saulius had the privilege of translating for him. Here are some of his reflections on the event:
Lithuania has not seen such intense work toward an event where over 200 evangelical churches worked together to fill the Siemens Arena for two days. Lithuania has only 1,5% evangelical population and churches are very small, but this unity that we saw inspired many. We thank God for Billy Graham Association for making such a significant investment of time and money to our country. There were over 28,000 attending in two days. More than 1,700 made a commitment to receive Christ. All of them will be followed-up by churches. That is a huge number for us. We had great program too – 400 voice choir,  lots of bands including NEWBOYS. These guys were awesome. I got to eat a couple of times with them and here their stories. They are humble and devoted followers of Christ.

I got a chance to spend time with the Team of BGEA. I was very impressed to see that some of these men served together for 50-60 years. The official photographer Russ has been travelling with BGEA since 1956. He is 81 years old and still on the road.  Amazing. When Franklin worked with me at his hotel room to get the sermons ready I was very moved by his humble and gentle spirit. He said „I don’t understand, but when I preach a simple Gospel message all over the world, poeple respond the same.“ He just preached the Gospel to me and that was our prep time for the nights. These were sweet moments.
Let's pray for huge ongoing fruit from this event, and that we might know similar unity amongst the churches in the UK, for where there is unity God commands a blessing.
Simon. 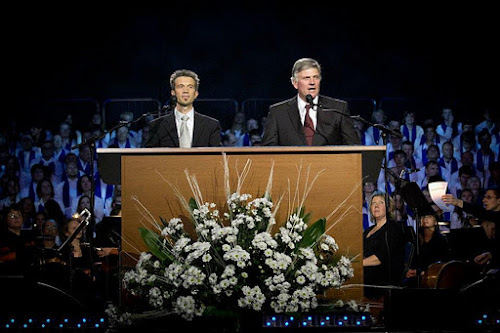