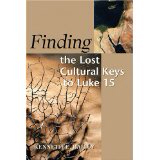 I know that a load of you have already bought the Tim Keller Prodigal God book which goes with our current series. We've sold out (again) at the bookshop and are getting in a whole load more copies for Sunday, or you can get hold of the Kindle or iBook version if that works better for you. I'd really encourage everyone to read it as it is a great accompaniment to the series and will help you to get more out of it. It's also quite a short book, and is written in a very readable style, which always helps.

For those of you who want to go into more detail on the three parables in Luke 15, I want to recommend a book called "Finding the Lost Cultural Keys to Luke 15" by Kenneth Bailey. It takes a look at the parables in Luke 15 (the lost sheep, the lost coin and the lost sons) and helps us to understand how they read to somebody from a Middle Eastern background rather than from our Western understanding. I've found it incredibly helpful, both in understanding how differently ideas and concepts are expressed by people from the Middle East, and specifically getting to grips with the relevance and meaning of sheep, shepherds, coins, and the father son relationship as they relate to the parables.

We often think of the apostle Paul as being a great theologian, and Jesus being more of an example to us in his life, death and resurrection. One of the things I love about this book is that it presents Jesus as a master theologian and thinker, and helps us to see that we need to understand the writing of Paul in the light of what Jesus said, rather than the other way round. It is quite deep at points, and if you're like me you'll probably have to read some sentences several times to get their full meaning, but it's well worth the effort and I'm getting so much from studying it.

Tim Keller also references this book as part of the inspiration for the Prodigal God, so if you've enjoyed the Prodigal God it will give you a deeper understanding of where Keller got his ideas from.

I'll just say it one more time, I've really enjoyed it and encourage people to read it :)

Hope to catch you on Sunday for part two of our series.