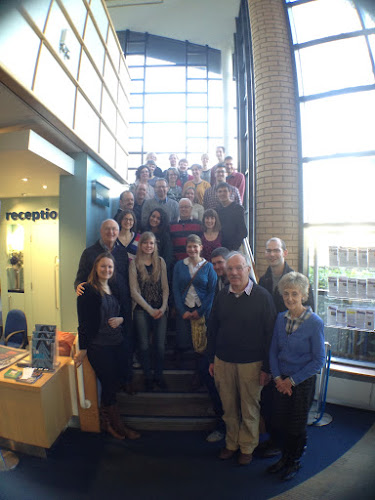 Today (Friday) a whole load of the staff and academy students are packing up getting ready to move in the New Year to our new offices, the Barn near Wokingham. We're doing this primarily to make more space for children's work on a Sunday, but also to provide space for more staff, and more space in the Kerith Centre for midweek ministry.

As part of the move a group of staff, both past and present, met this morning to remember the time we've had in the Kerith Centre offices, and to thank God for all that has gone on there. The photo on the left is of some of the people who were there.

It was amazing to hear Ben Davies tell the story of the journey God has had on when it comes to offices. When he first came to the church in 1964 his office was a room in his house. He then moved to a run down council provided office, before making the move to a portakabin outside the church building which used to be on the K2 site. We then in time added a second portakabin, before making the move into the Kerith Centre offices in 1989. Initially three were a handful of people in the main office, with Ben Davies, Ken Bothamley and Malcolm Kayes in separate offices. In time we've packed out the main office, as well as filling Ken and Malcolm's old offices with the youth and pastoral teams, the Rochdale room with the Creative Arts team and the Spurgeon room with the Social Justice team.


It's important for us to remember that God is always on the move, and that this move to The Barn is just the next step on the journey God has for us - all very exciting.

People have been asking a number of questions about the office move. Penny Lander, who has been expertly planning the move, has been collating the questions and asked me to share these answers with you via the blog. I hope they're helpful, but if there's anything else you'd like to know then please get in touch and we'll do our best to make everything as clear as possible.