All Change on the 15th September 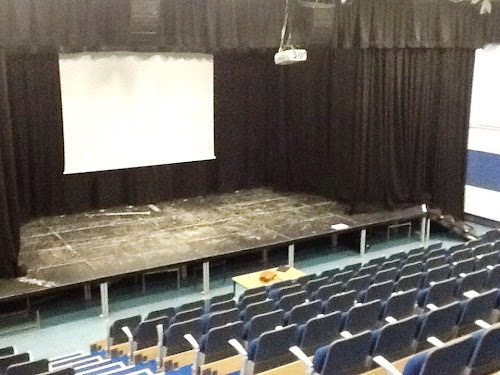 The 15th September sees the launch of our new site which meets in Sandhurst School - the picture is of the auditorium where the adults are going to be meeting. Hopefully the stage will look very different to the picture above, with a load of people in those seats! The meeting there will start at 10am, with drinks served both before and after the meeting (just like Bracknell). There is a big car park, great space for kids work and it's going to be brilliant! All the equipment for the new site has started arriving which makes it start to seem even more real.

Somebody asked on Sunday when they were going to be told which site to go to! If you've been around Kerith for a while you'll know that's not really our style. You've free to choose which site, and which meeting time, works best for you. In the longer term it would probably be good for you to settle on making one of them the one you regularly attend and serve at, but feel free to try out all four meeting and see which one works for you.

The evening meeting is going to move from a 7pm to a 6pm start. We feel that this could work better for people needing to get to school / work early on Monday morning so we're going to give it a go. Liam Parker, our youth worker, is also going to step into a role as site pastor of the evening meeting. That doesn't mean it's going to become a youth meeting, but it will hopefully give it a distincitve feel and attract a different crowd to the other three gatherings. Liam is taking over from Lee Layton-Matthews who has done a great job over the years of growing and developing the evening meeting.

There will also be the launch of a whole new feel to our kids meetings on a Sunday morning on both sites - I'll say more about changes in our kids work in a future blog. On top of that we're also buying a vision mixer for the Bracknell site which will stop that annoying roll when we switch between camera shots, allow us to display text over the top of the pictures, potentially do a live video feed to Sandhurst and much more. All of this has been possible because of the Give to Grow gift days - thank you to everyone who has given.

I'm sure there's more but that's probably enough for now! In all this change there will inevitably things that don't work or which we need to tweak, please be full of grace in those moments and always be looking to be part of the solution rather than just another person identifying the problem :)