I had the privilege of going to Belfast last week. I was invited by Tearfund to go and talk to church leaders, sharing with them some of what we've done in Serenje, and encouraging them to engage with similar Connected Church projects. I hope some of them will have been inspired to take the next step in engaging with Tim Magowan and his brilliant team running Tearfund's Northern Ireland office.

My experience is that whenever you go on trips like this it's always a two way process, and very often you get far more out of it than you feel like you've contributed. That was certainly the case this time. First off I'd never been to Ireland (North or South) before. Belfast is set in the middle of the most amazing countryside, it's a beautiful city, it has a rich history (although turning the Titanic disaster into a major tourist attraction is ingenious to say the least!) and everybody I met was incredibly warm and welcoming - it reminded me of being back in Newcastle :)

But I was also struck by how close the sectarian divide between the unionist and republican communities still is to the surface. Even with the riots over the flying of the Union Flag over Belfast City Hall last December, I'd somehow assumed that sort of thing was very localised and didn't affect the lives of 'ordinary' people. You can imagine my surprise to see this mural on the end of a house about 200 metres from the Tearfund offices. 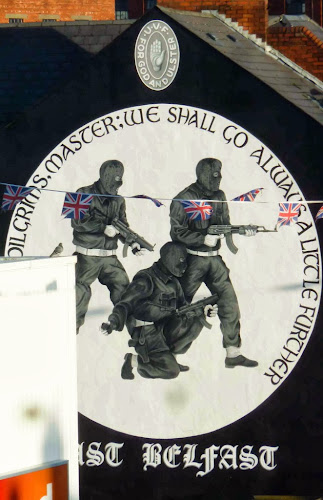 I know that at this point some of you are rolling your eyes, incredulous at my ignorance and naïvety, but I was genuinely shocked that a city which appears on the outside to be so prosperous, friendly and welcoming can also be in fear that the riots which happend last December could all be about to kick off again. In fact where the Tearfund offices are in East Belfast is right next to one of the "interfaces" between the two communities where the rioting was the fiercest.

Also as I reflected it was less than three years ago that there was major rioting in London and other English cities, much of which had nothing to do with any identifiable cause. Perhaps all this rioting says more about our human condition than it does about our history.

But I also reflected on Bill Hybels quote "The local church is the hope of the world". I heard a number of inspiring stories of how, although the church has in the past been at least part of the problem, many in the church now see it as a major part of the solution. Let me tell you two of those stories.

The first was of a church which is already two years into a connected church project. They have partnered with a church in Rwanda, the country which in 1994 experienced a genocide which lead to the murder of over 500,000 Tutsi people by the Hutu-led government, military and militias. What this church found when they visited Rwanda were amazing stories of the church in Rwanda, both Hutu and Tutsi churches, being at the centre of the drive for reconciliation and restoration in the country. They were so inspired by what they saw that they've been inviting church leaders from Rwanda to come and teach them about how the church in Northern Ireland can do the same in their communities. It was humbling to hear how a project which they thought was about helping an impoverished nation was in their estimation having a far greater impact the other way. Brilliant.

The second was the story of the building where the Tearfund offices are located - Skainos. For almost two centuries it has been the site of a Methodist church, with five different buildings having been constructed on the site over the years. In 2013 the church built an entirely new centre there which includes not only a worship space but a family centre, a cafe, offices, commercial housing, a homeless shelter, social housing, offices and much more. It's been built as a place to be used by the whole of the local community, and I can honestly say is one of the most remarkable places I've ever visited. Here's a picture of the 'street' around which the center is built - the idea was to build a new street which had never been impacted by the troubles and didn't belong to one particular community but would be used by and a home for all. 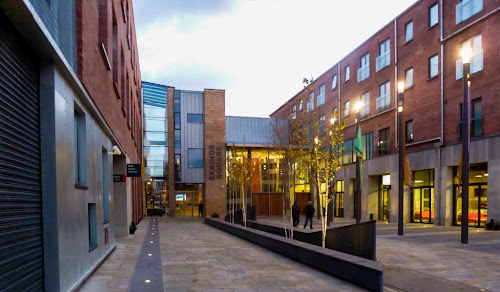 Finally, in case that was all too heavy, here's another picture John Mitchell (my travelling buddy) took of me with the cow milk jug at the guest house - and yes the breakfast was amazing! 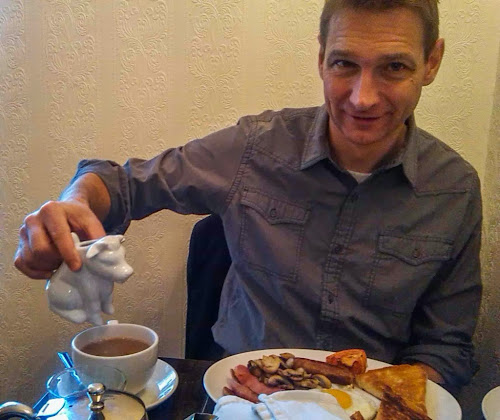