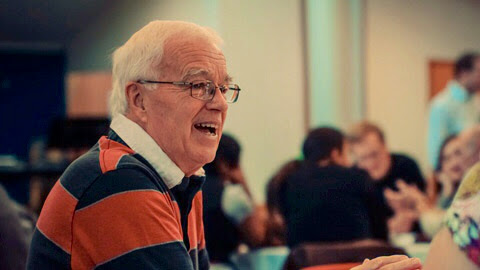 Those of you who were around on Sunday will have heard me announce that after almost 50 years of senior leadership in Kerith (43 years as Senior Pastor and coming up for 7 as an elder with me as Senior Pastor) Ben Davies has decided that this is the right time for him to step down as an elder and trustee.

I know how the rumour mill can begin to work at moments like this, and it probably won't be long before I get told that someone has heard on the grapevine that Ben and I have fallen out, that I've sacked Ben or that Ben is stepping down because he strongly disagrees with something I've said or done. Well in an attempt to stop any of that sort of nonsense I want to be very clear that none of those things are true.

What is true is that this is entirely Ben's own decision, and one over which he feels a deep sense of peace (his words not mine). Ben and I continue to be the best of friends - from my perspective my love and respect for Ben just continues to grow, and I think he would say the same of me.

Other than stepping down as an elder and trustee Ben will continue to do everything else he currently does in the life of the church. This will include:

On the 13th July Ben and I will travel round all 4 meetings to give us all an opportunity to hear from Ben, for us to pray for him, for him to pray for us and to honour him for 50 years of amazing service to our community. We would have done it sooner but that is the first Sunday where we're both around for all 4 meetings, hence this blog and my announcement on Sunday to try and cut off any daft rumours before they start!

We all owe Ben, and his wife Mo, a huge debt of gratitude for laying the foundation and fighting the battles to make Kerith all that it is today. Let's continue to honour them both, and be praying for them in this new season.

Hi Simon
I just love what you and Ben have been able to model with your leadership and transition. It speaks to the quality of both of your characters that you have made this work and that you honour one another. I am inspired and challenged by both you and Ben and your humility and grace. I pray that God will continue to bless both of your ministries and Kerith Community Church. Chris Porter