All is Grace - Brennan Manning 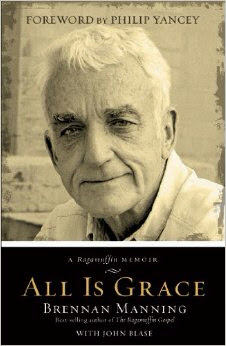 I have to admit that I'd never heard of Brennan Manning before I was looking on YouVersion for a Bible reading plan to do next, and came across one based on his book "The Ragamuffin Gospel". If I'm honest I chose to do it simply because I was intrigued by the title (yes I am that shallow!), but it spoke to me deeply as I used it to meditate on what grace, forgiveness and being honest with God really look like.

I've been on a retreat this week, and one of the books on the bookshelf was "All is Grace", which is Brennan Manning telling his life story. I was interested enough to pick it up, and in the end read it in one sitting. It's painfully honest as he talks about his pain, his failures and his regrets, but also full of hope as he finds and proves God's grace in the midst of it all.

I've spoken in the past of how much Philip Yancey's book "What's so amazing about grace" impacted my life and completely reshaped my understanding of how God views me. In many ways Brennan Manning is a living example of the "scandal" of grace Yancey so eloquently describes.

If you don't have time to read the book I could summarise it in Manning's favourite phrase "God loves you as you are, not as you should be".