Today is Holocaust Memorial Day, marking 70 years since the liberation of the Nazi death camp at Auschwitz in Poland, where more than one million people were killed between 1940 and 1945. It reminded me of an email I got last week from Krystyna Lysakowska (one of our community) after my preach on courage, reminding me of her family's experiences in wartime Poland. I asked her whether I could reproduce it here, which she was happy for me to do.

Let's remember those who lost the lives in the death camps, all those who are still being impacted by the horror of what happened in them, and pray that we might have the courage to be the peace makers Jesus called us to be, fighting hatred with love and enduring to the end. 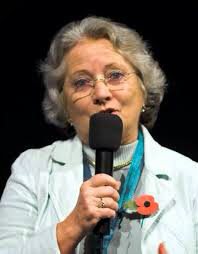 I was born in 1938 in Warsaw, Poland and lived there throughout the German occupation. My memories of the most of it are very few but they become fuller towards the end of the war. On 1 August 1944 Polish underground staged an uprising which infuriated Hitler to such an extent that he sent his 'Stormtroopers' in with the order to completely demolish the city and take all its inhabitants into camps. Warsaw was to cease to exist.

As a family of four we evaded being transported (twice) but spent weeks moving from one village to another, hiding in the forest but staying close to Warsaw in the hope that Russian Army would come soon and we would be able to return to our flat. With winter drawing close and the Russians showing no intention to come, my parents decided that we should try to make our way down south to where my father's sister lived.

Recently I had reasons to reflect on my wartime experiences and in particular on the last 5/6 kilometres of our trek to safety. After weeks of running and hiding; in fear, cold and hunger we were approaching our destination. We were walking along an unmade track. It was mid-November and the rain was bucketing down. Since the soil in the area was clay, each step called for great effort to pull your foot out of the squelching mire. Much of the time your foot came out minus the shoe…I am sure you can imagine the picture. Finally we arrived at our destination: soaking wet, caked in mud, cold, hungry and very bedraggled.

I am sure we presented a sorry and pathetic sight and I doubt if any of the villagers saw us as victors. Yet, we prevailed, we reached the goal, we were victorious through sheer hard slog and perseverance.

In our ordered, organised and easy lives our perception of winning and prevailing is more in a shape of victorious Caesars entering Rome on a golden chariot to the cheers of adulation rather than that of a foot soldier with all the sweat, blood and tears of a hard won battle.

Yes, glory and approval will come when we face Jesus but for now we need courage to plod through the mud of difficulties and be drenched by disappointments with the sure knowledge that it is all worthwhile.

And of course, the greatest example of courage is Jesus who: "For the joy set before him he endured the cross, scorning its shame, and sat down at the right hand of the throne of God".

In Christianity, courage is seen as endurance rather than bravery in battle (based on Thomas Aquinas). In each of the letters to the seven churches in the book of Revelation, Jesus makes promises to ‘him who overcomes/conquers, is victorious (in different translations) but the promises are preceded not by a call to battle but by calls to faithfulness, repentance and endurance. Things that churches were praised for are: patience in keeping commands, hard work, being true to Jesus’ name, love and faith and, yes, perseverance.