It's just over 6 months since the devastating earthquake in Nepal. You may remember that in response we took up an offering and raised around £3,500 which we sent to Tearfund for them to use in their relief effort. Jamie Fyleman, one of our good friends at Tearfund and the Director of Church Relations, wrote recently to let us know the difference the money that we and many others gave had made. This is what he had to say:
-----

I thought you'd appreciate an update from Nepal, following the earthquake almost 6 months ago. As you'll recall, the earthquake claimed the lives of almost 9,000 people; it destroyed homes, livelihoods and schools. In a few moments a nation was changed.

Of course, as ever, the TV cameras moved in. Night after night we saw the harrowing images, heard the cries of those affected and celebrated the all too infrequent miracles. And then the cameras moved on. Tick tock, most forgot.

Go back just before the disaster, we at Tearfund had been talking lots about our work in Nepal. Months before we’d had a small film team there and had been talking about our church mobilisation work in the country. Church after church helping communities help themselves out of poverty and in turn helping them stop child trafficking.

In those communities, Steve Collins, who at the time of the earthquake led our work in Nepal, said the response to the disaster was strikingly different. ‘People weren’t just sitting around waiting for aid. Despite losing so much, they were organised and smiling - knowing that they held the key to turning the situation around. When we visited other communities, people were sitting waiting for the aid to arrive.’

So what has been achieved in the last six months? In headlines,Tearfund and its partners have been able to achieve the following: 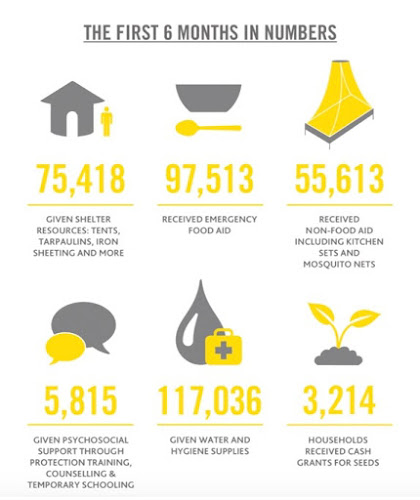 Of course the work goes on. We’re just 6 months in. Indeed the church isn’t ever going away.

Behind the statistics are individual stories. Here’s just one. Surya and Kanchi have four children. They’re subsistence farmers, living in the foothills of the Himalayas. The earthquake destroyed everything they had - their home and their land.

Tearfund and its partners have however been able to step in - initially providing emergency accommodation and supplies. Together we were able to provide them with all the equipment needed to make safe shelter, keeping them dry in the monsoon rains.

But that shelter, made from iron sheeting, won’t last forever. That’s why attention is now changing and we’re starting to teach local masons how to build homes that are much more resistant to earthquakes. We’ll then supply families, like Surya and Kanchi’s, with the resources to rebuild their homes with the help of the trained masons.

The generosity of Kerith and others, as it stands with the church in Nepal, makes this and tens of thousands of other stories possible. On behalf of all at Tearfund, our partners and those we serve, thank you. Oh and here’s a little film of some of those we serve saying thank you themselves.