Several years ago we embarked on a project as a community to help build a dormitory in Serenje in Zambia, a safe place for 100 girls to live in as they completed their secondary school education. This was part of a wider HIV/AIDS project which we sponsored as a church, and which was run in partnership with Tearfund.

In total we raised in excess of £750,000 over five years to help fund the two projects, and although the HIV/AIDS project was by all measures very successful with many children helped back into education and many families given food security through the provision of seed and goats, the dormitory project has faced a long series of delays and setbacks. However, in the background teams from Kerith, Tearfund and our Zambian partners the Evangelical Fellowship of Zambia have been working incredibly hard to keep the building of the dormitory moving forward, and I'm delighted to say that it is now nearing completion. That is such an answer to prayer - praise God.

Rather than have my abridged version of what is going on I thought I'd just let you all see whole of the latest update from Tearfund. It makes exciting reading.

Please be praying for the completion of the dormitory, and for everyone involved including Ralph Allen from Kerith who designed the building and has been advising on construction, and Anne Mumbi from Tearfund who is overseeing the project in Zambia. Please also be praying for the next phase as a matron to run the dormitory is appointed and the girls who are going to live there are chosen.

Finally a hige thank you to everyone who has given to the Serenje project over the last 7 years. Know that your generosity has made, and a continues to make, an enormous difference in the lives of people who we may never meet, but who are our neighbours.

This update covers the current status of the construction project as at 15th October, 2015 . While in Serenje two meetings were held - first with the Church leaders currently in the building committee, then the site meeting with all the different artisans working at the site. The following are the update highlights by category.

Water Reticulation: The 10,000 litre water tank – has been set up near the bole hole. The water pump has been installed and the electrical supply cables too have been connected. The plumber has laid the piping work and so far water has reached the Matron’s quarters as that’s where the plumber is currently staying while doing his plumbing work. 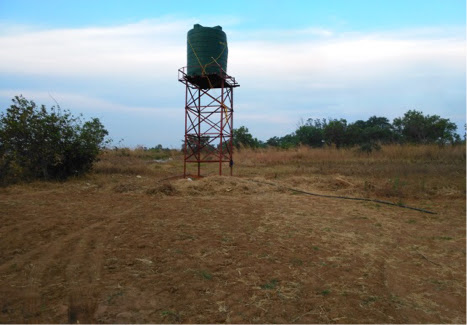 Flooring: The builders at the time of visiting had commenced on the screed floor. Three rooms had been completed on the Matron side’s wing ( Southern) and were being cured. In the meeting with the team , they intimated that the flooring would be completed by end of October or first week of November in case of an unforeseen circumstances happening with the core team. 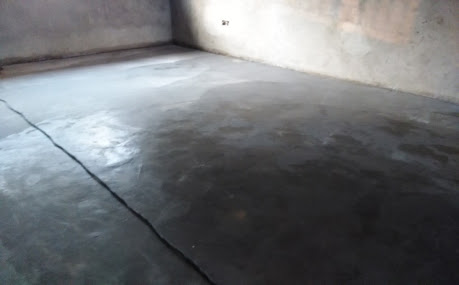 Fencing: The security fencing at the time of visiting had been completed both on the Matrons side and the main entrance. The final colour for the fence will be decided once the whole building is painted so that the colours are well coordinated. The entrance fence has a sliding gate while the Matron’s side has a normal gate that will be locked normally. 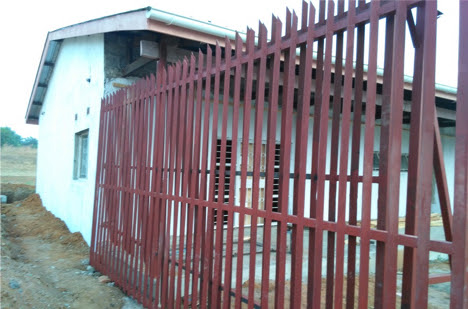 Spoon drainage: Works on the spoon drainage had commenced too while works on gutters had been completed at the time of visiting. The blundering works that were outstanding in the corridors were also being worked on by the carpenters and hoped to be completed by end of the week. 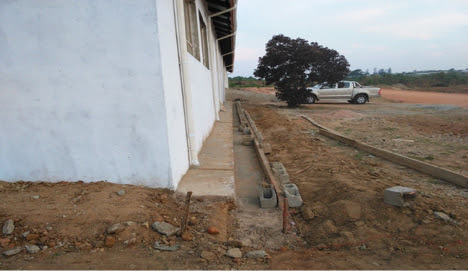 At a meeting held with the various artisans, it was estimated that most of the works would be completed by 31st October and if any delays, first week of November. This includes tiling, flooring, all Carpentry works, spoon drainage and all plumbing works – laying the pipe work and mounting the Sanitary ware.

The external electrical components as these will be completed only after all the other works have been done. Power is on site and only the Matron’s side has been switched both inside and a few security lights to brighten the outside. Currently the power in on single phase and it will likely take a little longer about a month for the Power Company to move it to 3 phase source.

Painting: this too may not be completed by end of October as it’s the final activity once all the other things have been completed and the place has been cleaned. This will go hand in hand with skirting and electrical fittings.

While it has been exciting to see the progress being made after all the materials were bought, the team has started planning for the procurement of dormitory equipment. This includes the ordering of beds, lockers, cookers, crockery, fridges etc., furniture for Matron’s Office and house. Quotations have been collected and will be passed on to the Logistics team for approval and requesting of funds to be wired through the Tearfund account.

The economic situation in Zambia currently is bad as the currency is losing value sometimes twice in a day and so in such circumstances, it will be very important to have a short turnaround in terms of decisions to buy and approvals.

The Job description for the recruitment of the Matron is being finalized and this will be tabled before the Serenje Church leadership for prayer and support towards recruitment of the right person that will manage the Girls compound, inspire, lead them to Christ and motivate them.