Over the next few weeks I want to let you know about some of the things going on with our finances. I particularly want to focus on money we've been giving away through our Generous gifts days and the collections we had at the Christmas Carol Concerts and the impact that money has been having, but I wanted to start with a brief summary of our 2015 finances. We did talk about this a few Sunday's ago, but I realise some of you will have missed that and others will want the opportunity to have time to look at the figures, so I thought I'd repeat it here.

First giving for 2015, which was excellent. From this slide you can see that our giving was just £4,210 under budget, less than 0.5% of our total budgeted income of £847,690. That's quite amazing, and I want to say a huge thank you to everyone who gave so generously to our general fund over the year. That money has allowed us to do so incredible things locally, nationally and internationally and through it we know many lives have been touched and changed - thank you! 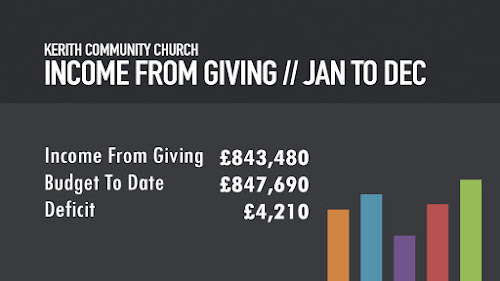 So what about our financial health? Anyone in business will tell you that cash is king. That's not true for us, Jesus is our King and the one we trust and hope in, but that doesn't remove the obligation on us to manage our finances in a way which honours God and ensures the long term future of Kerith. I've see too many churches and Christian organisations struggle or go under financially to think that we're somehow immune from having to handle our finances wisely.
We have a goal to start every months with £100,000 in our general fund - the money we have in the bank which isn't already allocated to be given away and isn't in reserves. That means that if we have a big expenditure at the start of a month we don't have to worry about the offerings come in to cover that expense.
We also have a goal to have £250,000 in reserves. This is around three months of operating expenditure for us, and is what the charity commission would recommend is prudent. We hold reserves for three reasons: 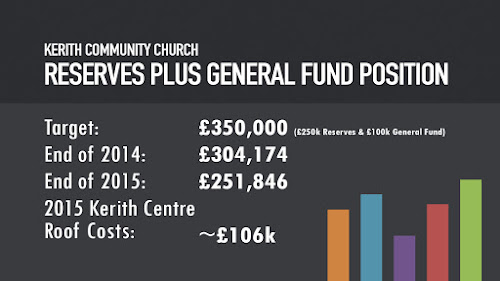 As you can see from the slide above at the start of 2015 we had £304,174 in our combined general fund and reserves. By the end of the year that had dropped to £251,846. At first glance that may seem worrying in that it's dropped by around £53,000 over the year, until you factor in that in 2015 we realised that we could no longer put off fixing the leak in the Kerith Centre auditorium roof. We therefore incurred an unbudgeted expense of around £106,000 in 2015, without which we'd actually have exceeded our reserves target by the end of the year.

Throughout 2016 we have built into our budget regular transfers to our reserves to move us back towards our target, although as with last year we won't be afraid to spend reserves if we need to.

Hopefully that all makes some sort of sense - if not please ask!

I've included below some photos of our shiny new roof - taken from a drone by the contractors who have done all the work. A final mention and thank you to Steve Hart who worked tirelessly with out facilities team and the contractors to make sure we got a roof which is going to serve us well for at least the next 25 years! 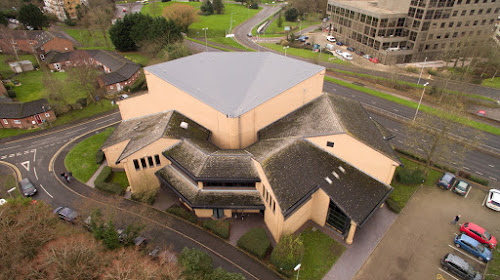 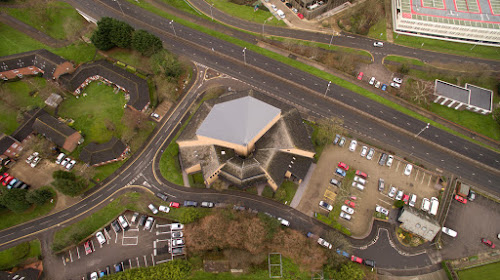