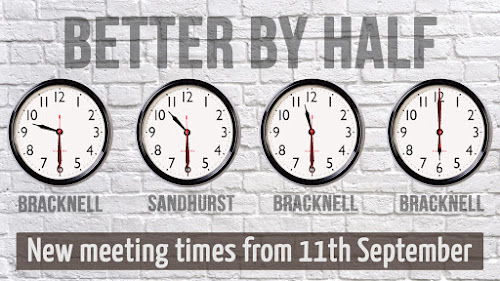 In order to create space for growth in Bracknell, from the 11th September 2016 we are changing the Bracknell morning meeting times to be 9.30m and 11.30am, and Sandhurst to be 10.30am. The evening meeting in Bracknell will stay at 6pm.

I'm going to talk about this in more detail next Sunday (4th September) but I wanted to put some of it in a blog before then.

Part of our history as a church has been creating space for new people to come. This has included:

Every time we've created space God has filled it.

We're now at a point that the 11am meeting in Bracknell is close to being full again, with every available room being used for adults, children or young people and several of those rooms at capacity. Longer term the plan is to redevelop K2 to both allow greater numbers of people to come, and to create dedicated spaces for children and adults with special needs (more on this at our vision night on Tuesday 20th September, 7.45pm in the Kerith Centre to which everyone is invited), but redeveloping K2 is going to take time, so we need to do something in the interim.

The core of our vision is "helping people find their way back to God", and we can't effectively do that when there is no space for new people to come. If we're serious about our vision then we can't stay 'here', doing nothing is not an option, so we need to do something in order to allow more people to come.

Looking at the numbers coming to the 9am and the 11am shows the following (the numbers are for Sunday 12th June): 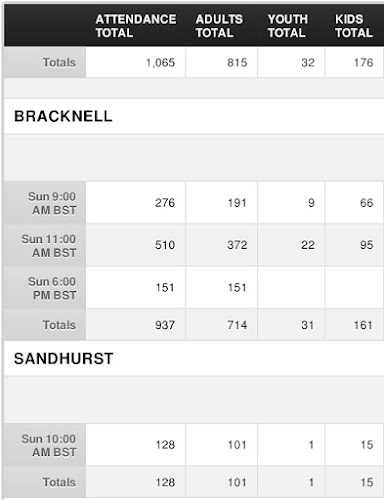 You can see that we had close to twice as many adults at the 11am in Bracknell as we had at the 9am, with around 50% more children. We have plenty of space to grow at the 9am, but at the moment it is clear that the majority of people prefer to come to the 11am. We're therefore going to move the meeting times back by 30 minutes in order to encourage people to come to the earlier meeting.

Upsides of the change are:

There is a possibility that in time all we'll achieve is making the earlier meeting the larger one. If we sense that happening we'll change the start times to be 9.15am and 11.15am.

At the same time we will change the start time of Sandhurst to be 10.30am. This will make it more straightforward when we need to stream the preach or move people between the sites, and will allow the Sandhurst setup teams to start work at a more civilised time.

I realise that lots of people don't like change, but in reality this is a small change compared to many of the changes we've made in the past. I want to encourage us to embrace these new times, and more importantly the vision behind them. We're not a club that exists for our own convenience, but the church of Jesus Christ which exists for the benefit of those who don't yet know Him.