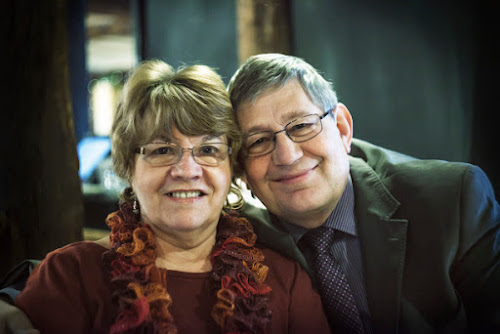 Earlier today I got a message from Esther Ross-Watson to let us know that at 6.28am this morning Singapore time her husband Michael had passed away. Although Michael has been battling cancer for some time now, the recent news about how his treatement was progressing had been positive, so I know that this will be a shock to many of us.

I will always count having known Michael as one of the greatest privileges in my life. I know when I first met Michael I struggled to believe some of the stories he told of God's provision and the ways God had used him, simply because they sounded so amazing. However, the longer I knew him the more I got to know that not only were all the stories he told me absolutely true, but they were only the tip of the iceberg in terms of all he had experienced in God. I've rarely met anyone with such a strong pastoral heart, with such faith for incredible acts of generosity, with so many stories of God repaying him and Esther for their generosity, and with such faith and joy in the face of adversity. I will treasure my coffees and lunches with him and the times he both encouraged and challenged me. I will never forget his acts of generosity, both the small ones such as when he bought blankets for all the academy students because he'd heard they were getting cold in the classroom, to giving away thousands of pounds when he had no idea where the money was coming from. He was one of a kind, and we will deeply miss him.

From what Esther has told me the wake and funeral will be held in Singapore over the next few days to allow all their Singaporean, Indonesian and Australian friends to attend. I fully expect that once Esther is back in the UK there will be a thanksgiving service where we can all come together to thank God for Michael and what he meant to so many of us. I'll let you all know once we have those details.

As I heard the news of Michael I was reminded of the words of Job "The LORD gave and the LORD has taken away; may the name of the LORD be praised." (Job 1:21). Let us praise God as we reflect on the gift Michael was to so many of us, and let us continue to praise God as we process our grief over him no longer being with us.

Please be praying for Esther, for their children Angie and Tim, and for all of us around the globe who will be mourning the loss of this amazing man of God.