Book Review: The Book That Made Your World 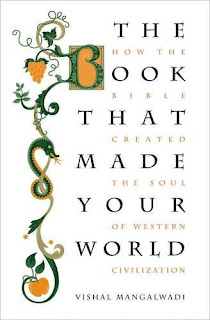 I recently finished reading “The Book That Made Your World: How the Bible Created the Soul of Western Civilisation”.

It’s written by an Indian philosopher called Vishal Mangalwadi, who from his position outside of our culture examines how the teaching of the Bible has shaped Western civilisation. He not only looks at what has shaped our culture, but also how other world views have shaped other cultures. He also illustrates much of what he says from his own fascinating life story.

Areas where he looks at the impact of the Bible include:
It’s quite brilliantly researched and written, and helped me again to appreciate just how unique the Bible is, not only in showing us the way to be reconciled to God but in its ability to speak into, inspire, instruct and shape every aspect of our individual lives and our society as a whole.

However, on a more sobering note he considers not only what got us here, but also what the future holds in an increasingly secular age which rejects both the authority and the teaching of the Bible. His last paragraph, which I’ve included below, is worth pondering on and praying over, not only in terms of the future for Western civilisation, but also for us as individuals as we consider the place we allow the Bible to take in our lives.

“Rome’s collapse meant that Europe lost its soul - the source of its civilisation authority - and descended into the ‘Dark Ages.’ The Bible was the power that revived Europe. European’s became so enthralled with God’s Word that they rejected their sacred myths to hear God’s Word, study it, internalise it, speak it, and promote it to build the modern world. At the dawn of the 21st century, the West is again losing its soul. Will it relapse into a new dark age or humble itself before the Word of Almighty God?”
Posted by Simon Benham at 10:36 AM