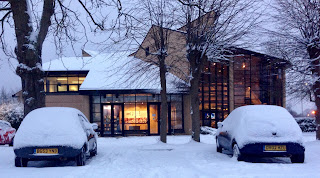 Those of you who have been around the Kerith Centre recently will I’m sure have noticed that it’s been quite chilly inside the building.

The reason for this is that in the middle of December all three boilers in the Kerith Centre stopped working, and have refused all efforts to coax them back to life (at least without us spending a huge amount to have them fixed). We’ve known for a while that they were going to need replacing, but had been advised that they should be all right for one more winter - sadly that hasn’t been the case. For now we’re heating the building with a whole load of room heaters for the smaller rooms, and industrial gas heaters for the auditorium. All of this is helping, but for the next couple of weeks you might want to bring an extra jumper on a Sunday or if you’re coming for a midweek meeting.

In the midst of this I want to pull out some good news and things for us to be thankful for.

The first is that we need to be very thankful if this is the most serious hardship we face. For many Christians gathering as church means putting your life at risk, with a very real threat of persecution, arrest or even death. Last month our Foreign Secreatery, Jeremy Hunt, started a review into what more can be done to support the 215 million Christians around the world who last year faced discrimination and violence, and the 250 Christians who on average are killed every month. In respect for our brothers and sisters in those nations let’s not let it being a bit colder than we’d like stop us going to church.

Secondly we are going to have new boilers fitted the week starting Monday 21st January. We’re hoping they’re going to be up and running in time for the start of the Alpha course on the 23rd January. The heating system is being modified to make sure the problems we’ve seen before don’t reoccur (for the technically minded we’re having heat exchangers installed) and the new boilers should be more than up to heating the whole building for years to come.

Thirdly because we’ve built up reserves we can afford to do this work without having to have a gift day. The new system will cost around £40,000 to buy and install, but we can do that from our reserves, and use gift days to fund much more exciting things like new sites and doing new things on our existing sites.

Finally we’ve saved around £3,000 on the cost of the boilers because somebody we have helped through our social justice ministries happens to sell boilers, and as a way of saying thank you negotiated a cheaper price with the company he works on the boilers we’re having installed. As Jesus taught us, you reap what you sow.

So lots to be thankful for, and an opportunity to wear those Christmas jumpers for a couple more weeks. God is good :)

The secret to keeping warm is multiple layers. And, if our noses get a bit cold, we can reflect on the difficulties experienced at this time of the year by those who are homeless, sleeping in tents etc. and due to lack of security they are often losing their spare clothes too...