Living a Kairos Life in a Chronos World 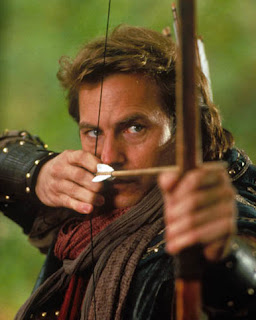 One of my favourite films as a youngster (OK not quite so young) was Robin Hood: Prince of Thieves. Unforgettable elements include Alan Rickman as the Sheriff of Nottingham, my favourite tree(!), some terrible geography as they travel from the South coast to Nottingham via Northumberland, but perhaps most of all some incredible scenes involving Kevin Costner doing amazing things with a bow and arrow.

All that as an intro to my sermon from Sunday, kicking off our new series by talking about how to declutter our time. I spoke on how the greek language has two different words for time.

The first is ‘chronos', which refers to a period of time; a second, an hour, a week or a year. The key feature of chronos time is quantity.

The second is ‘kairos', which refers to a critical or opportune moment in time. The key feature of kairos time is quality.

Part of the origin of the word kairos describes the moment when an archer releases an arrow (hence the Kevin Costner references). It is a unique moment which requires both a particular set of circumstances (the arrow being in place and the string of the bow being pulled fully back), and once it has passed has a bearing on everything that follows (the archer can’t influence the trajectory of the arrow once it has been released). That kairos moment defines what happens in the chronos time that follows.

That is a good picture for our lives. We live in a chronos world, defined by timetables, schedules and deadlines. But it is the kairos moments which give our lives direction, meaning and richness. For those of us who are followers of Jesus those kairos moments are very often the moments where we hear from God, sense his presence or seize a God given opportunity.

On Sunday I suggested some ways we can cultivate and engage with the God given kairos moments in our life. Go and listen to the talk for the full list, but I wanted to highlight one, which is to start every day with God. I’m increasingly seeing that first thing in the day is a unique kairos moment where we set the trajectory for the rest of the day. If we start the day connecting with God and inviting him into our day, then there is a good chance we will take that into the rest of the day. If we start it on Facebook and twitter it is likely to be a very different story.

I talked about one commitment I’ve made, which is every morning to aim to pick up and read my Bible before I look at my phone. That one commitment, which is rapidly becoming a habit, is proving to be transformational in my life. If that’s a habit you too would like to form we’ve created some tools to help you develop it - take a look here.

I’d love to hear stories of people pursuing habits in order to engage better with the kairos moments in our lives, and the impact of those moments. You can always leave a comment on the blog, or send me an email. We may even share your tips or tell your story on a Sunday.

Don’t miss next Sunday where we’re going to look at decluttering our friendships!

Hope you have a great week.

Good sermon just I thought it was more about "taking Aim" and being purposeful rather than decluttering. However I have picked two habits I want to create and one I want to get rid of. £ days in so far so good