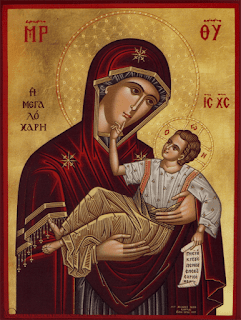 On Sunday I spoke about the encounter that Mary, the soon to be mother of Jesus, had with the angel Gabriel (recorded in Luke 2:26-38).

As part of my message I spoke about the debate which took place in the early church as to what title (in Greek) should be given to Mary. Was she Christotokos or Theotokos. Who cares, you may well ask, and what do those words even mean!

The early church debate wasn't really about Mary, but about the nature of Jesus. Was Jesus in his incarnation two separate persons, one human and one divine with Mary only giving birth to the human Jesus (making her the Christotokos), or was the baby in her womb both fully God and fully human in one person (making her the Theotokos).

The first position is called Nestorianism, named after a preacher called Nestorius although he probably never actually taught this. The second position was argued for by a number of early church theologians including one called Cyril of Alexandria.

This issue was debated at a church council in Ephesus in AD431 which affirmed the Nicene Creed, and decided that based on that creed Mary was Theotokos. This was further affirmed at a later church council in Chalcedon in 451 which came up with the Chalcedonian Definition which again declared Mary to be Theotokos. This understanding of the person of Christ, that he is both fully God and fully human in one person, is accepted to this day as orthodoxy by the Protestant, Orthodox and Catholic Church.

It is important to be clear that by calling Mary 'Mother of God' we are not saying that she is the Mother of God from eternity, or that God the Father or God the Son originated from her, but that she was the mother of God the Son in his incarnation.

Why does this matter? Well it matters because it impacts our salvation. When sin came into the world every part of our humanity was broken, and so the whole of our humanity needs to be saved. If in the incarnation Jesus had only taken on part of our humanity then only those parts of our humanity he took on could be saved, healed and redeemed through him. If in the incarnation he had only taken on a body but hadn't become fully human then only our bodies could be saved. But because he fully took on every aspect of our fallen, sinful human nature (although he never sinned) and became one of us, then through his death and resurrection every aspect of our humanity can be saved and healed. Not only our bodies but our souls, our minds, our emotions, our hopes, our fears and our dreams can all find salvation in him.

One of the early church Fathers, Gregory of Nazianzus, summarised this beautifully when he declared:

'The unassumed is the Unhealed'

The writer to the Hebrews echoes this when they write:

Since the children have flesh and blood, he too shared in their humanity so that by
his death he might break the power of him who holds the power of death – that is,
the devil – and free those who all their lives were held in slavery by their fear of death.
For surely it is not angels he helps, but Abraham’s descendants. For this reason he had
to be made like them, fully human in every way, in order that he might become a
merciful and faithful high priest in service to God, and that he might make atonement
for the sins of the people.

So let's be grateful that Mary was the 'Mother of God', that the child she bore was both fully divine and fully human, and that through his death and resurrection every part of our humanity can be saved, healed and redeemed.

ps - there is lots of theology behind what I've written above. I've almost certainly said something which somebody will point out to me as being heresy! If that's you then please let me know and I'll correct it. Thank you :)

Posted by Simon Benham at 7:28 PM No comments: